Right now, mortgage rates in Spring Hill FL (as in the rest of the nation) are higher than they’ve been for 15 months—a trend that’s likely to continue. We have to wonder about the impact higher Spring Hill Florida mortgage rates will have on Hernando county home sales in the coming year.

First, some perspective. If mortgage rates do increase in 2014, it’s no ‘done deal’ that home buyers will be put off—nor that a wave of foreclosures will follow. The reason? By past standards, interest rates will still be low, even at the 5½% predicted by the N.A.R. Any hike in mortgage interest rates are coming off the historical 3.52% set in the spring of 2013. Consider: most of us were paying mortgage rates between 7 – 8% throughout the 1990’s! 5½% looks like a fire sale compared with those.

Factor Two: surprisingly, a projected rise in interest rates is not predicted to dampen the enthusiasm for acquiring property. The Mortgage Bankers Association predicts that home sales will increase nationally by 10% in 2014. I have no doubt that some Spring Hill first time homebuyers could be waylaid by rising interest rates—after all, a 1% increase in mortgage rates equates to approximately a 10% rise in monthly payments. But overall, buyers who can meet the current lending standards should still be able to afford to own. Given the cost of the renting alternative, they may decide they can’t afford to pass up the right house at the right price.

Additionally, there is a strong argument that the principal effect of rising interest rates is less likely to be on Spring Hill Florida home sales than on refis. The Mortgage Bankers Association predicts that refinancing demand will drop by half in 2014 (when you chart that kind of number, it looks like a cliff!). Many homeowners will already have locked in last year’s interest, so they certainly won’t be interested.

Any drying up of the refinancing business may have yet another effect. There could be a follow-on effect as lenders start loosening their lending criteria to attract new business. First time buyers that have been locked out of the market until then may (we are now two after-effects later, so this has to be a ‘may’) find themselves suddenly eligible for a home loan.

Given the healthier economy and falling unemployment, the outlook for the Spring Hill Florida housing market in 2014 has reason to look positive.

Thinking of buying a home in Hernando County and want to shop the best mortgage companies in Spring Hill FL? Now’s the time to call me to discuss timing!

For quite a while, Hernando County residential real estate holders – that is, homeowners – haven’t had to work very hard to come up with a description for the U.S. real estate market. ‘Lousy’ certainly came to mind. ‘Bleak’ was a strong contender. ‘Cautiously optimistic,’ at best a distant third.

Find A Home In Hernando County

So this months Wall Street Journal report came as a quiet reminder that, for serious-minded investors who view our situation from a less-involved perspective, our residential real estate outlook is neither lousy nor bleak. In fact, the combination of lower residential prices and the international currency environment has created a ‘property-buying binge’ by Asians, Canadians, Europeans and Latin Americans – more than 60% of whom pay in cash.
“There’s this international view that America is on sale,” according to one property manager. He should know; he’s an executive whose Chicago-based company buys foreclosed homes and manages them for investors. A year ago, all of his investors were domestic. Now, one in five is foreign.
Whereas before, most foreign residential real estate investors were interested in ‘trophy’ properties to enhance their personal prestige, the new onslaught is coming from buyers who see that they can earn high returns by buying here, renting, then reselling in the future when the market rebounds. It seems that in many countries, a residential real estate downturn is expected, but has yet to occur. In their estimation, ours is already history.
It looks like “a gift,” according to one developer, who judges that an oceanfront condominium in Rio de Janeiro sells a level 50% higher than an equivalent property in Miami. International or domestic, investment money is always drawn to bargains — but when bargain basement prices are combined with the perceived safety represented by U.S. residential real estate, the lure is apparently irresistible.

Thanks, Nick, for giving us some outside perspective; I guess we can adopt the ‘cautiously optimistic’ view with a lot more confidence. If you have been waiting on the sidelines to make your own Hernando County residential real estate investment, I hope you will give us a call when you decide that now is the time to invest in property in Hernando County and the Spring Hill area. We are standing by to help you find the property you’re looking for!
Agent Trust Realty
6113 Exchange Way
Hernando County FL, 34202
941-907-9444

New Port Richey, Florida — Protesters lined the streets in New Port Richey, targeting a new law that would allow insurance companies to raise their rates for sinkhole coverage by thousands of dollars a year in some cases.

Even if you don’t own property, they warn this will affect you too by crippling Florida’s already fragile economy.

Facing a massive sink-hole insurance rate increase in the thousands of dollars, retiree John Haun says he’s worried he’ll be forced from his home. “My neighbor just got his bill and he got a $5,000 increase in his,” said Haun.

In a room filled with similar worry, The Florida Association for Insurance Reform (FAIR) brought in a bipartisan panel of local politicians, promising to do what they can to repeal the new law that removed the cap on sinkhole insurance premiums.

“That bill was signed into law by our Governor. It has barely gone into effect and we already see the consequences the people of this area will pay,” said Fasano.

State Representative Robert Schenck, a Republican representing the 44th district, actually voted for the original House bill, hoping it would reduce fraud. Now, he says, he’s worried too many people will be hurt.

“Seventy percent of all sinkhole claims that have been paid out, that money has not been put in to fix that property,” said Schenck, explaining his original position on the issue. “So if you guys want to know why we have  so much trouble with sinkhole coverage in Hernando County, that’s why. It’s the rampant fraud.”

Rose Rocco, a Democrat and former Hernando County Commissioner, said fraud should be addressed by the insurance companies and not pushed onto consumers.

“It’s up to the insurance companies or whoever is supplying that service to make sure that they’re paying a claim that’s reasonable and just,” said Rocco. “And to put the blame on people now is unconscionable.”

A mortgage expert also told the crowd it’s not just a concern for current homeowners. People considering purchases of property may be told by banks that they must carry the insurance, which could put a chilling effect on an already depressed real estate market. That could have a ripple effect on the overall economy. Steve Fingerman, with E Loans Mortgage Inc says people will have less money in their pockets.

Realtors say it’s already having a chilling effect on business, even before the state’s insurance commission decides whether to grant the request from Citizens Insurance to raise the rates.

Some clients, even some from other countries, are already aware of the sinkhole issues, and say they don’t want to take a chance that other insurance companies will quickly line up to follow suit.

“I have international people saying ‘Tell me about the sinkhole problem. What’s it gonna cost us?'”

The insurance commissioners are not expected to rule on Citizens rate hike request until mid-October, but before then, on September 13 at the Tampa Convention Center, the same commission will be taking public comment in the center’s main ballroom.

The hearing is expected to draw hundreds, perhaps thousand of people. 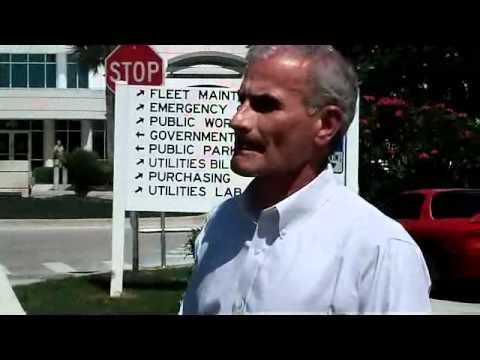